The Erdene Zuu Monastery is the earliest surviving monastery in Mongolia. Located in  Ovorkhangai province, in Kharkhorin and adjacent to the ancient city of Karakorum, it is part of the Orkhon Valley Cultural Landscape World Heritage Site.

Abtai Sain Khan, the ruler of the central Mongolia and grandfather of Zanabazar, the first Jebtsundamba Khutuktu, ordered the construction of the Erdene Zuu monastery in 1585 after his meeting with the 3rd Dalai Lama and the declaration of Buddhism as the state religion of Mongolia. Stones from the nearby ruins of the ancient Mongol capital of Karakorum were used in its construction. Planners attempted to create a surrounding wall that resembled a  Buddhist rosary featuring 108 stupas. The monastery was damaged in 1688 during one of the many wars between Zuungars and Khalkha Mongols. Locals dismantled the wooden fortifications of the abandoned monastery. It was rebuilt in the 18th century and by 1872 had a full 62 temples and housed up to 1000 monks.

In 1939 the Communist leader Khorloogiin Choibalsan ordered the monastery destroyed, as part of a purge that obliterated hundreds of monasteries in Mongolia and killed over ten thousand monks. Three small temples and the external wall with the stupas survived the initial onslaught and by 1944 Joseph Stalin pressured Choibalsan to maintain the monastery as a showpiece for international visitors, such as U.S. Vice President Henry Wallace, to prove that the communist regime allowed freedom of religion. In 1947 the temples were converted into museums and for the four decades that followed Gandantegchilen Monastery became Mongolia's only functioning monastery.

After the fall of Communism in Mongolia in 1990, the monastery was turned over to the lamas and Erdene Zuu again became a place of worship. Today Erdene Zuu remains an active Buddhist monastery as well as a museum that is open to tourists. 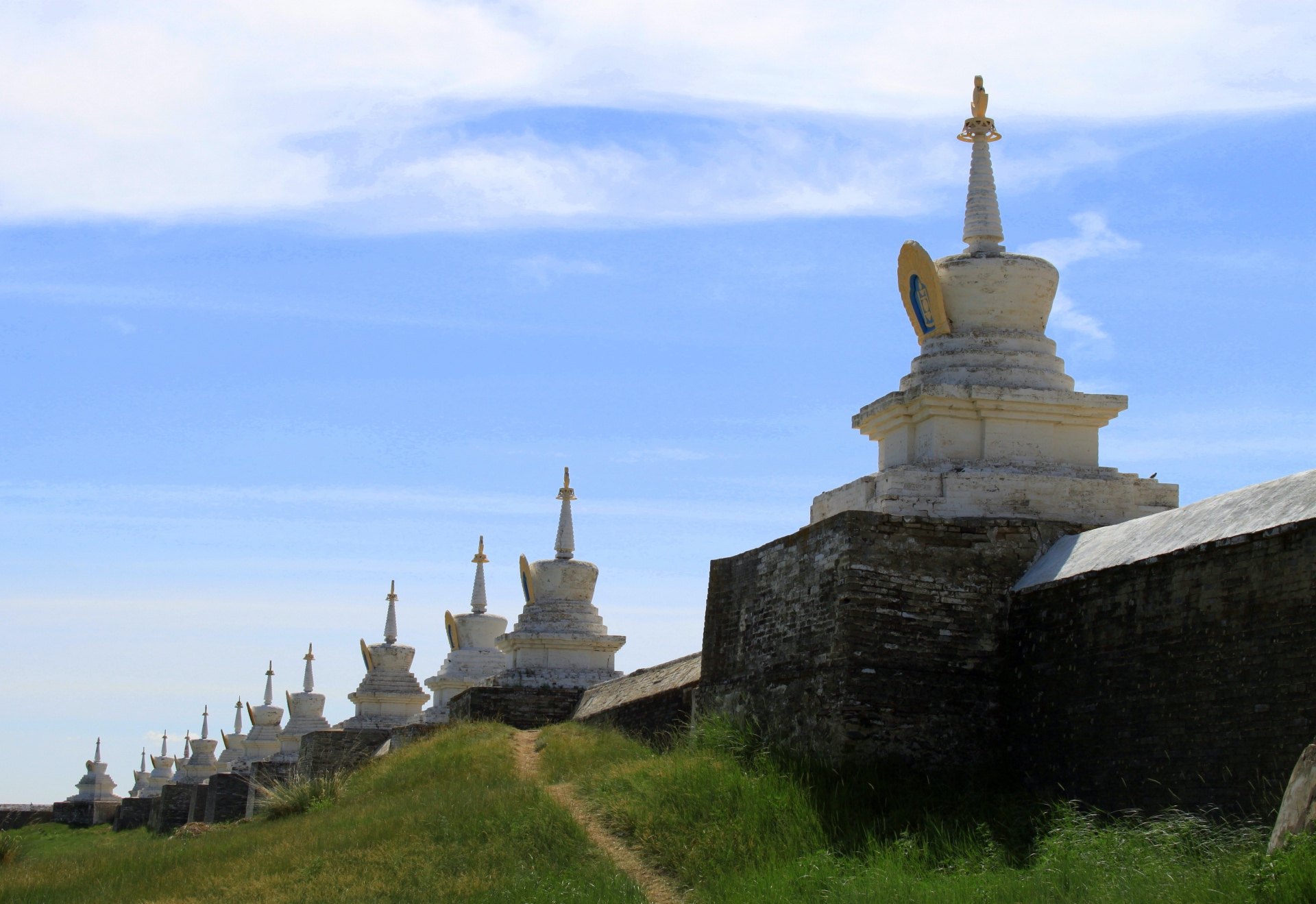 Kharkhorin, the ancient capital of the Great Mongol Empire is located on the open steppe on the right bank of the Orkhon River in central Mongolia, some five kilometers away from the river itself. Kharkhorin was founded in 1220 by Chinggis Khan. The name means black stones or black walls.

Settlement patterns were informal with traders and craftsmen establishing themselves around the area until it grew into a town. Chinggis Khaan had selected the perfect site for a nomad camp, but not necessarily as the site of fixed capital with property and people to protect.

It was his Chinggis Khaan's son Ogodei who built the city into an organized urban area. The walls formed a rectangle, with its top and bottom oriented on a northwest /southeast axis, conspicuously different from the usual north/ south axis. The outer city walls were made of earth, 1000 meters on the north side, 1500 on the west, and two kilometers on the east. The remains of a northeast corner tower have been discovered, leading to the theory that each corner had one, modeled on the Chinese cities of the era. Ogodei's palace was situated in the southwest corner, itself a walled enclosure. West of the palace area was a pond filled by a canal from the Orkhon River. This canal also fed water into the city itself.

Kharkhorin was roughly divided into four quarters. There was one for the traders, many of whom were Muslim, and markets, and another where the artisans imported from China congregated. The Mongol rulers were highly tolerant of religious differences and in Kharakhorum there were mosques, twelve "idol" temples, as William of Rubruck called them, though certainly at least one of these was Buddhist, and even one Christian church, all clustered together in one end of the city. The fourth quarter was a walled enclosure for the Khan, his family, and his officials. A third of this palace city was taken up by government officials.

Under Ogedei and his successors, Kharkhorin became a major site for world politics. Munkh Khaan had the palace enlarged, and the great stupa temple completed. They also commissioned the famous Silver Tree of Kharkhorin at the city center. The sculptor was Guillaume Bouchier. A large tree sculpted of silver and other precious metals rose up from the middle of the courtyard and loomed over the palace, with the branches of the tree extended into the building. Silver fruit hung from the limbs and it had four golden serpents braided around the trunk. At the top of the tree rose a trumpeting angel. When the khaan wanted to summon the drinks for his guests, the mechanical angel raised the trumpet and to his lips and sounded the horn, whereupon the mouths of the serpents began to gush out a fountain of alcoholic beverages into the large silver basin arranged at the base of the tree

Kharkhorin attracted numerous visitors from the west, all of them writing about their travels. Most notable is the Flemish Franciscan monk, William of Rubruck, who visited in 1253 and penned a detailed description of Kharakhorum and Mongolian life in his Journey to the East.

Ogodei died in 1241 and his widow, Toregene Khatun, ruled Kharkhorin as regent until the naming of Guyuk as Khan in 1246. He died in 1249 and was succeeded by Munkh Khaan who was followed by Ariq Boke in 1259. None of these successions was without contest, as there were several vying branches of Chinggis Khaan's family. Kublai Khan overthrew Ariq Boke in 1264, going on to defeat the Song dynasty and complete his occupation of China by 1279. When Kublai moved his capital to Khanbaliq (modern Beijing), Kharkhorin was reduced to a backwater provincial city and was finally destroyed by invading Chinese forces in the 15th century. Mongolia's largest and grandest monastery, Erdene Zuu, was reputedly constructed from the ruins of this once great city in the 16th century and is still active today. The ruins of the once-great city are under the protection of UNESCO and the Mongolian government. 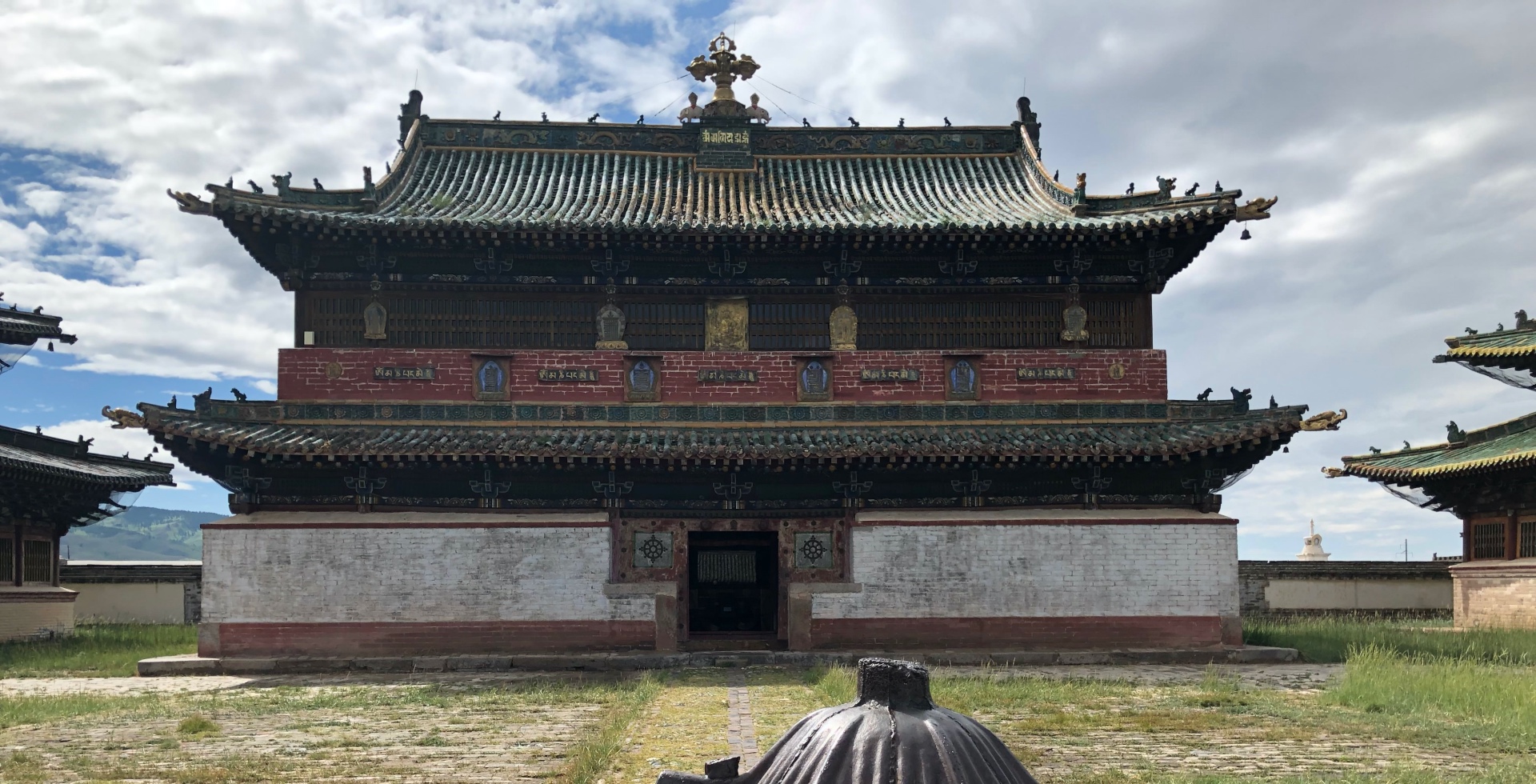