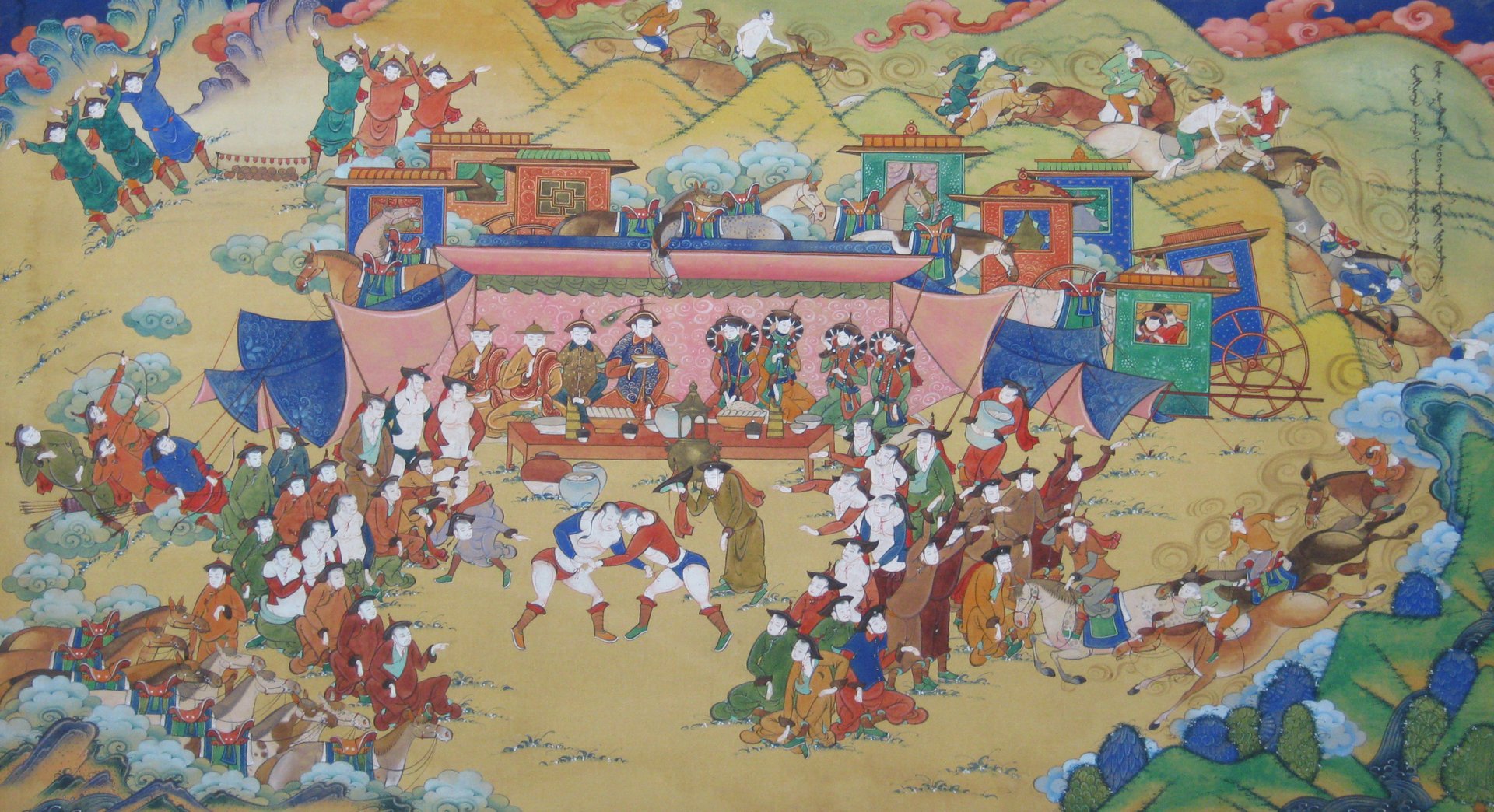 Archery in Mongolia has had a long and famous history. Our folk legends tell of Erkhii Mergen, the great archer who saved the people from a drought by shooting down six suns. And when the legendary mother of the Mongolian nation wanted to instill the idea of unity into her feuding sons, she sat them down before her and gave each an arrow telling them to snap it. Of course, they could do that easily. Then she gave six arrows to each of them and told to snap them all together. None of them could. This is how the Mongolian people first learned about strength through unity.

Archery contest continues a tradition dating from the time of Chingis Khaan when they were intended to sharpen military skills. The bow is an ancient invention going back to the Mesolithic Period. Ancient Mongols made them contributed to the design of the bow as a combat weapon. Mongols are almost born with archery skills, an integral part of the nomadic lifestyle. From very childhood, such qualities as perfect eyesight, measurement, patience, and strength are nourished to develop a good archer. Today Mongolians use a less complicated form of archery.

From the time of Chingis Khaan and the Mongolian nation proper, there are many accounts of great feats of archery. The ancient stele inscription named Chingis Khaan stone that dated back to the 13th century was first discovered in 1818.

One interpretation of this inscription could be as follows: ‘While Chinggis Khan was holding an assembly of Mongolian dignitaries, after his conquest of Sartaul (East Turkestan), Esungge Esunge Mergen ( Master Archer), the son of Chingis Khaan’s brother Khasar shot a target at 335 alds’ (536m).

During the National Naadam Festival, all-male, female, and child archers wear traditional costumes and compete in three categories: Khalh, Buriad, and Uriankhai, which have differences in the bows and arrows used, as well as the distance of the target. Khalh is the name of the majority group of Mongolia and Buriad and Uriankhai are the names of two out of over 20 minority groups of Mongolia.

Archery field is called ‘zurkhai’ in Khalh archery and ‘zuraakhai’ in the Buriad one.
Only men are allowed to compete in the Uriankhai archery, while the other two categories allow the participation of men, women, and children – in separate competitions.

Bow: Mongolian bows are very tight ones so that it requires pure strength to stretch it out. In the past Mongolians used three types of bows: “big hand” -165 – 170 cm long; “average hand” -160 cm and “small hand” -150 cm long. Today Mongolians mostly use the average hand bow which requires a force of 22 to 38 kg to draw it. Contestants use compound bows fashioned from sinew, wood, horn, and bamboo.

Arrow: Arrows are usually made from pine, birchwood, or willow branches and had feather fins that help the arrow to reach a distance of 900 meters. The normal length of an arrow is between 80 and 100 cm, and the shaft's diameter is around 10 mm. Dimensions of the arrow are 90-100cm in length, 10mm in diameter, and weigh 40-45g for women 40-75g for men.

Target: The target is a ‘wall’ made of cork cylinders braided together with leather sharps. It is four meters long and 50 cm high. The target is placed on the ground consisting of 360 small leather rings to a wall.

In accordance with the ancient custom, several men stand on either side of the target singing a folk song (uukhai) to cheer the contestants and then use hand signals to indicate the results. This song is a very old one. Until recently the shooting range was three times as long or about 200 meters. Therefore it was easier to convey information through a song rather than dispatching a messenger to inform about the result. 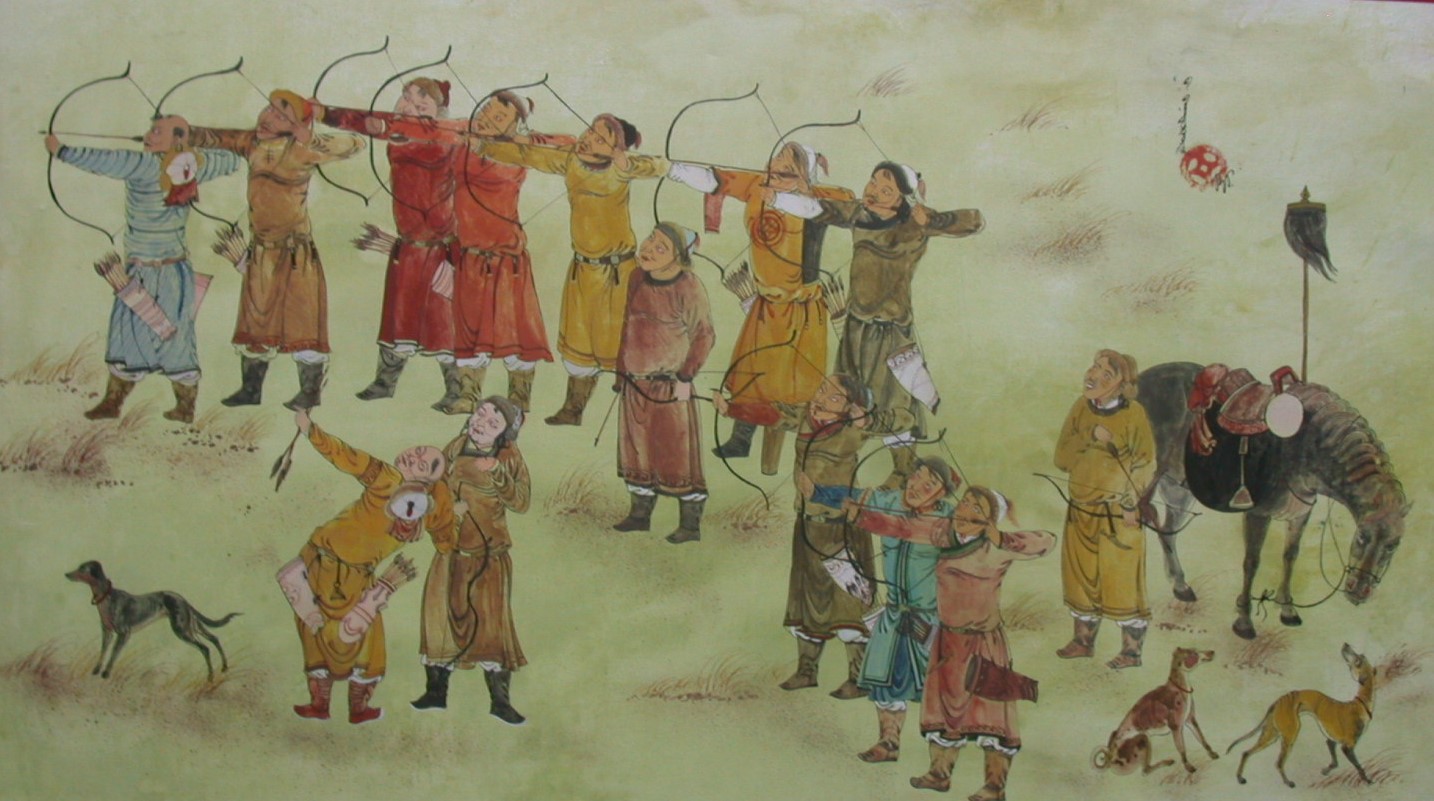 Bow: As we understand, a composite bow by definition has several layers. We have mentioned the birch frame and the layer of horn/bone. In addition to this, there is a layer of specially prepared birch bark whose purpose is to protect against penetration of moisture. In addition to this again is a layer of sinew, which is taken from deer, moose, or other game animals. The tendons of domestic animals may also be used, but Mongols feel that tendons from wild animals like deer, moose, and mountain sheep are the strongest and best. Naturally, the bow has to be glued together. The preferred and traditional substance used for the impregnation of both leather as well as their bows is fish glue. As a matter of fact, fish glue has been proven through millennia to be highly capable of resisting moisture. Moreover, it is durable and lasts longer than modern epoxy resins, which are prone to molecular fatigue.

How is fish glue made? The process that yields the highest quality is to take swim bladders from freshwater fish, soak them in hot water to extract the protein substance, and then boil the resultant soup for a prolonged period. If sufficient quantities of swim bladders cannot be obtained, it is also possible to make hide glue by boiling animal skins. This latter method, however, results in a glue of inferior quality, because it absorbs moisture, whereas glue made from ichthyic air bladders is highly moisture-resistant.

Although all materials needed to build the Mongolian bow are to be found in the immediate natural environment, the whole production process is very complex. It takes a long time to build a bow that is to meet the Old Mongol requirements. May also assume that the selection of the best wood material for the frame requires knowledge and experience.

The usual procedure in the production of a traditional Mongolian bow is as follows: The wooden frame is cured, and the horns and/or bone to be used are boiled for softness. This makes it possible to fit the different parts together with great precision. As we understand, high-quality Mongolian bowmaking is certainly the most impressive craftsmanship. When the wooden frame and the horns/bone parts are ready, the sinewing can take place. First, the tendons have to be dried. After that, they are crushed until they form a mass of loose fibers. Next, this mass is mixed with fish glue to form a solid but not rigid layer. It is important to apply the correct thickness and amount of sinew, and it is done in a two-stage process with some days in between. Too little makes the bow weaker, too much would make it stiff. When completed the layer of sinew could be as thick as a human finger before drying. Sinew has a peculiar quality: Unlike other materials, its strength increases when subject to stretching or impact. This form of elasticity is a property stemming from the molecular structure of the protein of tendons (collagen) and can be seen as another striking demonstration of the innate superiority of natural solutions and materials. When used in a Mongolian composite bow, the effect is that as the horn plates in the front snap back to their former shape, the sinew layer in front contracts in the same split-second, adding further acceleration to the shot as the arrow is propelled forward.

At each stage, fish glue has been applied to secure all the parts. In the horns and wooden parts, the sides that are to be glued against each other are first grafted with a toothed special tool in order to give the strongest possible hold.

The last step is usually the applying of the protective birch bark layers, which are also boiled until soft, so ensuring a proper fit before glued to the finished bow. When the layer of birch bark has been added to the composite construction, the whole bow is wrapped tightly in ropes and placed in a form where it is allowed to dry and harden at room temperature for one year or more. This ensures that the bow becomes extremely strong and that it keeps its shape and snappiness even after many years of frequent shooting. A Mongolian bow is stored in its own leather case, protecting the bow when not in use.

Arrow: Birch is a typical material for arrows. The normal length of an arrow is between 80 and 100 cm, and the shaft's diameter is around 1 cm.

As for fletchings, tail feathers of a crane are favored, but tail feathers of all birds are usable. Eagle feathers make a particularly exclusive arrow, but since eagles are rare most arrows obviously cannot have fletchings from eagle's tail feathers. Feathers taken from the wings are said to flow less smoothly through the air, so if given the choice tail feathers are picked. The Mongols characteristically pay close attention to the minutest of detail; the placement of the fletchings in relation to their size, and what part of the bird they were taken from, is of great importance for correct rotation and good balance in the air. Consequently, these factors are painstakingly considered when making arrows after the Old Mongol standard.

The arrowheads, or points, could be everything from wide metal blades used for a big game (or in war) to the bone and wooden points, which are used for hunting birds and small animals. The high impact of this bow ensures that a bony point will be lethal when hitting the body of a smaller animal or a bird. In addition to these kinds of arrows, whistling arrows are useful during hunting, because the effect on animals of an arrow whistling away high above the ground is often to make it stop, curious to see what is in the air. This gives the hunter time to launch a second arrow, this time with a game head to kill the animal. These whistling arrows made by inserting an arrowhead of bone in which air channels have been created. When shot, such arrowheads make a very audible sound through the air.

The string: Traditional Mongol bowstrings are made from animal hide. First, every trace of fat is removed. Thereafter the hide is stretched and twisted. After this treatment, it will not stretch but remain taut. Although the skin of many fur-bearing animals can be used, horse skin is often preferred since it is said that this material maintains suppleness in the exceedingly low winter temperatures of Siberia and Inner Asia. It is also possible to use the intestines of animals as string material, but such strings are not water-resistant and thus only suited for use in dry and hot weather.

Silk and cotton, and mixes of these, can also be used. Modern archers generally use dacron and other man-made materials that require high technology to produce and therefore cannot possibly be made by the archer himself. Here we see another example that the use of primitive materials, although demanding in terms of individual skills and work, is the more reliable and sustainable strategy when viewed from a broader perspective.

When the bow is strung, the archer may sit down, using both feet to press against the bow as the limbs were bent while the string was attached. Using another technique, he or she could also stand upright, bow bent under one leg while the other leg holds the outer end. On horseback, the Mongol archer routinely strung the bow by placing one end of the bow between the foot and the stirrup while the arms pressed against the bow.