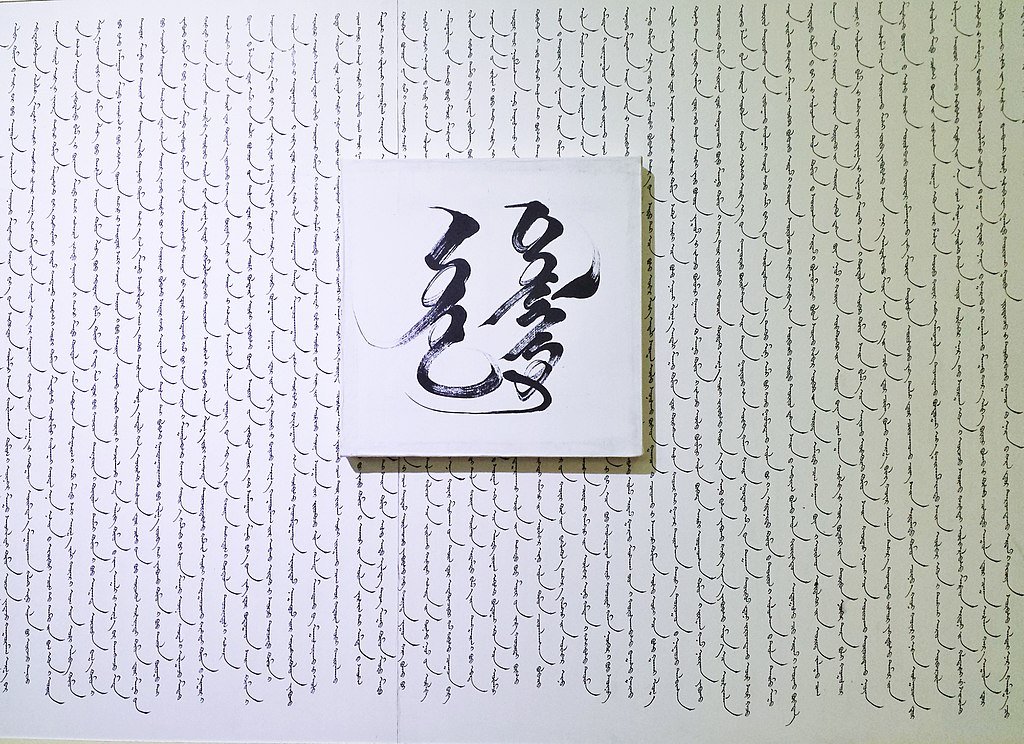 Researchers say that the world speaks 3000 different languages, which of only 13 are spoken among large populations over 50 million. Mongolian language and writings, however being used in small populations, have created very specific characteristics including numerous different scripts and characters representing particular ethnic groups and their dialects.

According to linguistic studies, Mongolian is considered an ancient group of language. The Mongolian language is in the Altaic Language family, which mainly consists of Mongolian, Turkic, and Tungusic languages. The latter one, Manchu-Tungus language is almost extinct now, so the Turkic languages (Kazakh, Tuvan, Kyrgyz, Uzbek, etc) is the closest one to the Mongolian language due to similar structure and phonetics rather than Japanese, Korean or Chinese.

The Mongolian language is in the family that named the Altai Mountain, a mountain range in Central and East Asia, where Russia, China, Mongolia, and Kazakhstan come together, and where the rivers Irtysh and Ob have their headwaters. The massif merges with the Sayan Mountains in the northeast and gradually becomes lower in the southeast, where it merges into the high plateau of the Gobi Desert. The mountain name comes from the two words al that means "gold" in Turkic and Mongolic languages and the -Tai word that means "mountain" in Turkic languages too; thus, literally, the "Golden Mountain".  Since prehistoric times, this huge mountain range has been a life resource and treasure like gold to the nomads.

The nomadic civilization has been developed by the Scythian period nomads in the Altai Mountain and its surrounding landscapes and transmitted as a traditional culture to the nomads who presently live within and around the Altai. It lies at the origin of nomadic pastoral lifestyle and culture around the Altai which is still practiced by Mongolian, Kazakh, and Turkic people as a living cultural tradition.

Today, the Mongol Altai cultural landscape and its associated heritage sites bear exceptional testimony to the existence of human beings in the Altai Mountains from ancient times to the present. This is demonstrated by the monuments, archaeological and cultural sites left by people going back to the Palaeolithic period through the Bronze Age and by successive nomads and their empires, including Scythians, Hunnu, Turkic, and Uighur people, and Mongols. The amazing combination of archaeological remains and intangible cultural expressions in the Mongolian Altai from different periods of the history of humanity in the last three millennia has given rise to a unique cultural landscape.

Modern Mongolian evolved from the Middle Mongol, the language spoken in the Mongol Empire of the 13th and 14th centuries. In the transition, a major shift in the vowel-harmony paradigm occurred, long vowels developed, the case system changed slightly, and the verbal system was restructured. Mongolian is related to the extinct Khitan language. It was believed that Mongolian is related to Turkic, Tungusic, Korean and Japonic languages but this view is now seen as obsolete by a majority of (but not all) comparative linguists. These languages have been grouped under the Altaic language family and contrasted with the Mainland Southeast Asia linguistic area. However, instead of a common genetic origin, Clauson, Doerfer, and Shcherbak proposed that Turkic, Mongolic, and Tungusic languages form a Sprachbund, rather than common origin. Mongolian literature is well attested in written form from the 13th century but has earlier Mongolic precursors in the literature of the Khitan and other Xianbei peoples. The Bugut inscription dated to 584 CE and the Inscription of Hüis Tolgoi dated to 604-620 CE appears to be the oldest substantial Mongolic or Para-Mongolic texts discovered.

The Traditional Mongolian vertical script language developed at the end of the 12th century; the oldest extant text dates from roughly 1225. The Pre-Classical period of the written language corresponds to Middle Mongolian. This language is slightly more archaic than the contemporary Middle Mongolian recorded in Chinese transcription in the Secret History of the Mongols (c. 1240) and in other texts and glosses in the Chinese, ’Phags-pa, Persian, and Latin scripts. The conversion of the Mongols to Buddhism (c. 1575) ushered in the Classical period (17th and early 18th centuries) of translation of scriptural texts from Sanskrit, Tibetan, and Chinese, and this period corresponds to the commencement of the Modern period of the spoken language. Not until the 19th century did features of contemporary spoken Mongolian languages begin to appear in Mongolian texts.

With the translation of Buddhistic texts, Mongolian received a large number of Sanskrit, Chinese, Tibetan, and Uighur terms, including not only technical religious words but also personal names and astronomical and calendrical terms.

At the end of the Ancient Mongolian period, the Mongolian language began to spread from its original homeland, and, during the Middle Mongolian period, various dialects began to develop into separate languages. The outlying languages—which today survive as Moghol in Afghanistan; Daur in the east; and Monguor (Tu), Bao’an (Bonan), and Santa (Dongxiang) in the south—were isolated from the main body of Mongolian languages when the tide of Mongol conquest receded. 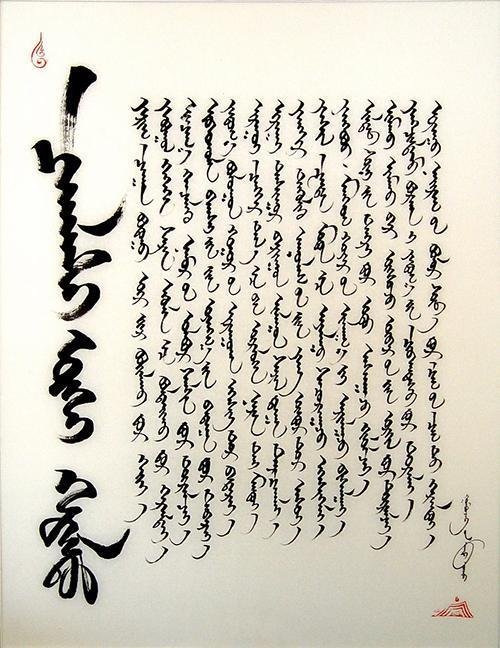 The classical or traditional Mongolian script, also known as the Hudum Mongol Bichig, was the first writing system created specifically for the Mongolian language and was the most widespread until the introduction of Cyrillic in 1946. It is traditionally written in vertical lines  Top-Down, right across the page. Derived from the Old Uyghur alphabet, Mongolian is a true alphabet, with separate letters for consonants and vowels. The Mongolian script has been adapted to write languages such as Oirat and Manchu. Alphabets based on this classical vertical script are used in Inner Mongolia and other parts of China to this day to write Mongolian.

During primary school, students are required to learn the traditional script. But because modern-day Mongolians don’t use it day to day, it gets forgotten, but most people who have studied it would be able to make out the general idea of a sentence written in traditional script.

There are so many archeological findings underlying such researches, one of them is “Chingisiin Chuluunii Bichees” which consists of 5 tracks and 20 words, commemorating Yesunge’s fascinating achievement of over 535 meters exact shot by archery during a festival near a place named Bukhai Sachigai.

This monument is 2 meters in length, 66 cm in width, 22 cm in thickness, found near the Kharhiraa River, in what is now the Chita province of Russia. The inscription was carved in the ancient Mongolian script. At the time of the discovery, Spaski thought that the findings belonged to the Kuandai Ruins of ancient, Siberian Russia, not realizing that the monument would amount to invaluable testimony of the Mongolian people, Mongolian Language, and Mongolian culture of writing.

It was not until after the monument was taken to St. Petersburg breaking into two pieces along the way in 1832 that real research began on the artifact. From that time on, the stone monument became known as "Chingis Stone Inscription", because the words "Chinggis Khaan" are the first two carved upon it. Some scholars call it "Yesunkhei (Esunhe) Stone Inscription" Yesunkhei was one of Chingis Khaan's Nine Generals because the meaning of the inscription concerns his achievement in archery. In the year of his discovery, Spaski transcribed the five lines of script on the stone. 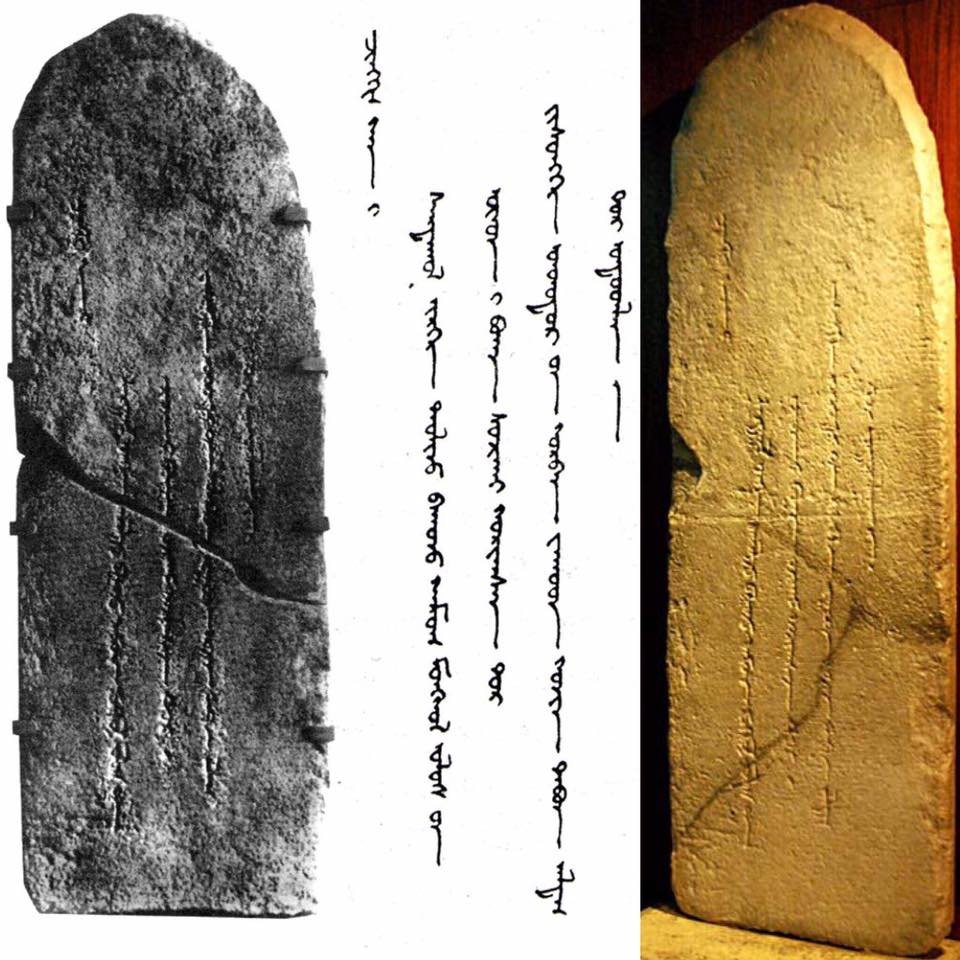 The inscription can be translated into English in the following way: -"After Chingis Khaan conquered the Sartuul Dynasty (Persian Empire in Central Asia ) in 1224, all Mongolian lords met on the Bukha-Sojikhai steppe. There, Yesunkhei, with a bow and arrow, hit a target from a 335-arm-span distance" (By modern estimates, a one-arm-span length is just over 1.6 meters a total distance of 335 arm-span is over 535 meters.)

Immortalized as "Chingis Stone Inscription", the writing is significant in Mongolian history, for it represents the long-held orthographic "custom" or "rule of respect" used in traditional Mongolian script and in the Mongolian language. The rule is that the names of leaders and lords always preface, as it were, poems and literature. The fact that Chingis Khaan's name appears first in the inscription shows that the rule has been in place for well over 800 years, if not longer.

OFFICIAL LANGUAGE AND SCRIPT OF MONGOLIA

Mongolian is the official and most widely spoken language of Mongolia. About 95% of Mongolia's population speaks Mongolian. Oirat and Buryat are the two most common dialects spoken. The Mongolic Khamnigan, Kazakh, and Tuvan languages are also spoken in different regions of the country.

At first, Mongolians have adopted Latin and transitioned into a totally foreign writing culture during the 1930s by poeticizing Mongolian words into Latin characters. It was introduced with an intensive and integrated movement including massive training clubs and forceful projects to the general public. But, this movement was suspended in a short time without any successful outreach.

Comparing to Latin, the introduction of Cyrillic was successful enough under huge political pressure from the Soviet Union during the mid-1940s. All the history and memories including Mongolian ancestors, tradition, and religion behind the Mongolian script was broken down in one moment. At the same time, Mongolians were isolated from the things, which were primarily of our cultural identity. As we have officially and fully adopted Cyrillic in the mid-1950s, it has taken only a decade to erase a nation’s cultural values.

Science aside, Mongolia is simply a pretty hard language to learn. Maybe the fact that vowels are separated into a masculine and feminine group makes a huge difference in not only the aspect of speaking but also in the grammar, or the fact that it is a language that’s spoken by pretty few people and hard to practice unless you live in Mongolia. The alphabet is bigger than most of the other countries and the stress in the parts of the word can make a huge difference in its meaning.

Mongolian has vowel harmony and a complex syllabic structure for a Mongolic language that allows clusters of up to three consonants syllable-finally. It is a typical agglutinative language that relies on suffix chains in the verbal and nominal domains. While there is basic word order, subject-object–predicate, ordering among noun phrases is relatively free, so grammatical roles are indicated by a system of about eight grammatical cases. There are five voices. Verbs are marked for voice, aspect, tense, and epistemic modality/evidentiality. In sentence linking, a special role is played by converbs.

Why is Mongolian a hard language for foreigners to learn?

Most foreigners have found the Mongolian language hard to learn because the learning sources are really rare unless you’re in Mongolia. Also, the main basics of grammar and the general accent are so different from most of the other languages.

Can Mongolians in China read the Mongolian language in the Cyrillic script?

Which language is easier for Mongolians, Chinese or Russian?

Even though this question is not about the Mongolian language itself, it can give some great understanding of it. Mongolian and Chinese languages couldn’t be any more different. Mongolians learn Russian better than any other foreigner since the letters are the same, so does the pronunciation. Also, there are lots of grammar similarities including cases of the nouns and the structure of the sentences. Meanwhile, Mongolians have a hard time learning Chinese since the pronunciation and scripts are so much different.

USEFUL MONGOLIAN WORDS FOR YOUR JOURNEY IN MONGOLIA

Now back to the basics. Even though mastering Mongolian might take several months, if not years- you can still say greetings to a Mongolian which is a warm ice break.  So here are some of the most basic phrases in Mongolian.